Here’s the video recording of the April 26, 2021 ANC 3/4G public meeting where the CT Ave Reversible Lane Study Proposal was discussed and voted on at 1:24:35 to hear it in the recording: https://www.youtube.com/watch?v=4n63kysQ_wQ&t=5065s

Information on the now completed DDOT Connecticut Avenue NW Reversible Lane Safety and Operations Study can be found here and information can be found below. The study and ANC Resolutions were in the hands of Acting Director Everett Lott whose recommendations to the Mayor is unknown, but on December 15, 2021, the Mayor announced her support for Concept C. Here is the announcement in full:

(Washington, DC) – Today, Mayor Muriel Bowser and the District Department of Transportation (DDOT) announced the selection of a preferred redesign concept for Connecticut Avenue NW that removes the reversible rush hour lanes and adds one-way, protected bicycle lanes on the east and west sides of the roadway.

“After considering several options, it was clear that this design best meets the needs of our city and moves us closer to a greener DC, a safer DC, and a DC that is less reliant on cars,” said Mayor Bowser. “We’re going to continue working closely with the community to update our infrastructure so that it is not only safer, but better aligned with the ways people are moving around our city and the future of transportation in DC.”

The preferred “Concept C” comes out of the Connecticut Avenue Reversible Operations and Safety Study. When the reversible lanes were in operation before the pandemic, 1,500 crashes were reported over a three-year review period. It was estimated that eliminating the reversible lanes would decrease crashes there by about 17 percent. The addition of protected bicycle lanes also helps to reduce the speed of vehicular traffic, reducing crash severity and making the area safer for pedestrians.

“Today’s announcement that DDOT will be pursuing a reengineered Connecticut Avenue—including a protected bike lane—is Vision Zero in action,” said Ward 3 Councilmember and Chair of the Committee on Transportation and the Environment Mary Cheh. “This decision marks a critical step in making the corridor a safer place for everyone, but, more importantly, it demonstrates the type of bold infrastructure planning that is needed across the District.”

“After two years of extensive stakeholder engagement and review of design options, we are very pleased in having the Mayor’s support with choosing Concept C,” said Acting DDOT Director Everett Lott. “This choice represents a true compromise in mitigating both the traffic and parking impacts within the corridor.”

The Connecticut Avenue NW Reversible Lane Operations and Safety Study was initiated in December 2019. DDOT held approximately 40 stakeholder and agency meetings as well as an extensive public comment period. The selection of this design supports moveDC sustainability and mobility goals by expanding the bicycle and pedestrian network to ensure a safe,

connected, and more equitable infrastructure for all users.

Completion of final design is expected to take 18 months.

For more information about the project, please visit: ddot.dc.gov/page/connecticut-avenue-nw-reversible-lane-safety-and-operations-study.

The Connecticut Avenue NW Reversible Lane Safety and Operations Study will assess the multi-modal (vehicular, transit, bicycle, pedestrian) operational and safety impacts associated with either removing or maintaining the current reversible lane system along Connecticut Avenue NW. The study effort will require the development of up to five concept recommendations, incorporating at least one no-build management option and one protected bicycle lane option.

The overall period of performance for Phase I of this study is nine months. Phase II of the study will consist of a 6-month performance period and may be executed by District Department of Transportation (DDOT) based on NEPA requirements should the removal of the reversible lanes be recommended.

DDOT will provide multiple points of active public engagement throughout the study process, including but not limited to, interagency coordination, citizen advisory/public meetings, stakeholder meetings and synchronization with other DDOT projects within the corridor.

The project review will include an assessment of effects pursuant to National Environmental Policy Act of 1969 (NEPA) and Section 106 of the National Historic Preservation Act of 1966 (NHPA). DDOT is inviting anyone who is interested to participate in the Section 106 process as a consulting party.

The Connecticut Ave study area corridor is located within northwest Washington, DC and is approximately 2.7 miles long. The corridor is a diverse mix of residential, commercial and educational uses. The primary study area consists of Connecticut Avenue from Legation Street to Calvert Street, NW and includes 24 signalized intersections. In addition, the secondary study area will consider operational impacts on Massachusetts Avenue to the west, Broad Brand Road to the east, Dupont Circle to the south and Western Avenue to the north. 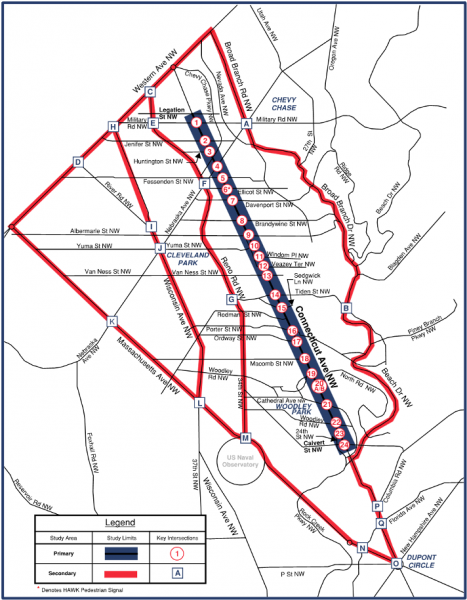 The District Department of Transportation (DDOT) is studying the feasibility of removing the reversible lane system as part of the city’s Vision Zero initiative, which aims to eliminate traffic deaths and serious injuries. Per the findings of the previous 2003 DDOT study, there is renewed community interest in reviewing the reversible lane system and exploring concepts for other mobility options such as bike lanes. This study will explore existing conditions and associated effects related to alternative scenarios for the current configuration of Connecticut Avenue, NW.

The goals and benefits for the Connecticut Avenue NW Reversible Lane Safety and Operations Study project include the following:

Here’s a December 13, 2021, Greater Greater Washington article of interest, “How These Six ‘Spokes’ Could Make Washington a Model Biking Region.”

The completion of the final design is expected to take 18 months.

Commissioner Cadwell and I are members of the Community Advisory Committee (CAC). Only two meetings have been held in 2022 so far. For more information about the project and previously held and upcoming CAC meetings (the public is invited to sit in and listen), please visit: ddot.dc.gov/page/connecticut-avenue-nw-reversible-lane-safety-and-operations-study.

While DDOT is completing the final design of Concept C, I am committed to working closely with my Commission colleagues to make sure concerns regarding possible diversion of traffic to side streets, parking availability, and any negative impact on local businesses are addressed and solutions provided and accounted for in the final plans before implementation work begins.

On another issue related to transportation, WMATA has continued the suspension of the E6 bus which makes it difficult for residents in Barnaby Woods and Hawthorne to get to the commercial corridor on Connecticut Ave., NW and Friendship Heights. The former Commission approved a resolution in October 2020 on the possible elimination of the E6 bus here.

Back in December 2021, I contacted DDOT regarding a microtransit option, following up on a presentation they gave in 2019 to the former Commission. I confirmed that Department of For Hire Vehicles (DFHV) currently manages microtransit in the District via DC Neighborhood Connect, an on-demand shared ride shuttle that operates in parts of ward 1, 4 and 5 and in the east of the river zone portion of ward 8. I asked for Ward 3 to be considered for this shuttle service.

I was told in January 2022 and it was confirmed on April 26, 2022 that the “internal study team and consultant have received your request about microtransit in Ward 3 and that area will be examined as a potential place for microtransit service. The study will be completed later this year and the findings/recommendations will be publicly posted on MWCOG’s [Metropolitan Washington Council of Governments] website this summer.”

Microtransit in D.C – Assessment of DC Connect and Opportunities for Expansion

Identification of options for microtransit expansion, particularly for populations needing to access medical and food services in the face of cuts in transit services.

… Do Better | Be Better | Live Better